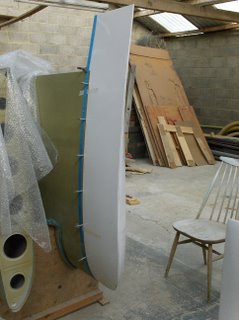 I have started on the left wing tip. Its well made, much better than the tips I received when I built an RV-9A. So far I have cut out a foam former which I have pressed inside the glass tip and pushed it onto the wing. I then used one of those straps (blue) with a ratchet to push the tip down to the leading edge. Without much pressure it pushed it about 1/8th inch forward against the leading edge. I am planning to make the tips removable with #6 screws and tinnerman washers at 2.5" spacing. For now I have marked out the hole locations and drilled every 3rd one with a #40 drill. 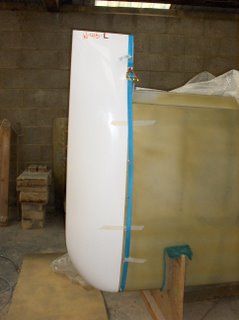 So far so good! I am worrying that I should have first locked the aileron in position to ensure alignment. I think I will do that next to be sure, though they are so stiff once mounted without attachment, that I doubt there will be much I can do to move where the trailing edge of the tip wants to sit. Lets hope it is in the right place!

I would strongly recommend having a foam mat on the floor when you are trying to get the tips on because they have a will of their own not wanting to go inside the wing.