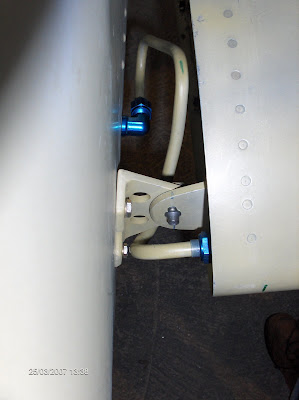 The path from the left hand tank, if it contains a flop tube, into the fuselage, is not an easy one.

The problem is the F-463 bracket is in the way, the space is narrow, and you have to keep the fuel tube inside the profile of the wing, or at least the fairing. It is possible however, though I had to use bending springs as well as a pipe bender to achieve it. The result will probably make the fuel giddy with the bends it has to go around, but at least this makes sure the stress is minimised and the springiness of the pipe maximised. It is a little untidy, but this is a lesser issue since it will be hidden once the fairing is in place.


As it snakes around the F-463 the pipe is clear of it at all times despite how it looks in the pictures.


Beyond the fitting on the wall of the fuselage, I will continue in the FUSELAGE section of the blog.

The second picture is from underneath. 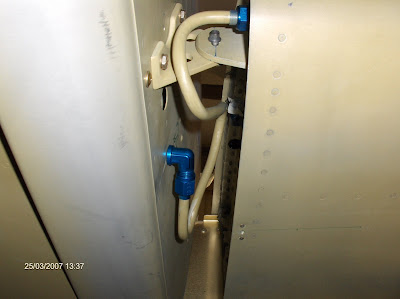 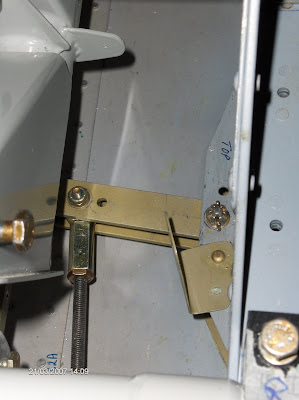 Deciding where to place the flap switch, which lets the AoA know the wing configuration, was somewhat difficult. Lots of the candidate positions would be hard to get to once the floor is riveted down, making maintenance difficult.

In the end, I have put it on the bracket on the RHS. The switch will bolt to the little brown bracket sticking up. Its lever hangs down and will get forced back just before the flaps are fully retracted.

If you double click on the picture to make it larger you will just be able to see the bolt holes. 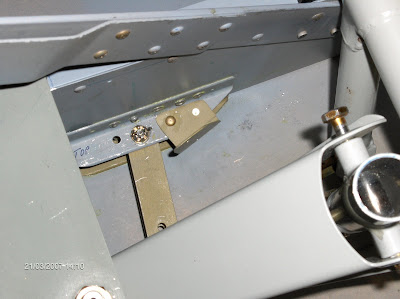 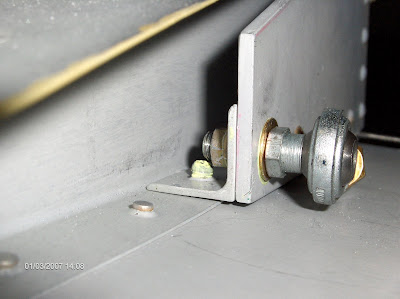 The left hand flap is finally working and running through the full range of 44 degrees.

Two points are worth noting. This picture shows the attachment of the drive bearing to the flap. 4 of the rivets attaching the angle to the lower surface are CS4-4. The sticky up heads leave no room for a normal nut so I had to use a metal lock nut. This just fits. I did not think of this solution until I had drilled the CS4-4 out once and tried to set a normal rivet in there. This proved impossible. 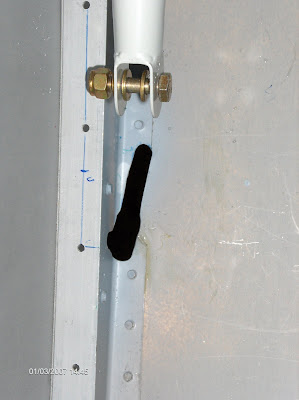 I have included this picture so you can see the hole in the floor.

I think the RH flap will be easier and quicker now I have done it before.